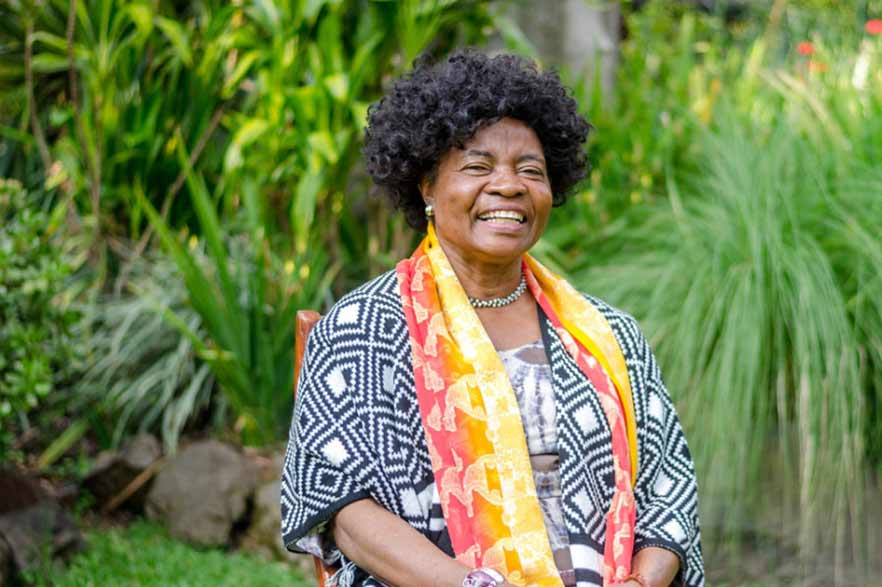 Three elderly women sit under a mango tree in Musiega village in Vihiga County chatting animatedly. They are members of a women group, which consists of 22 widows, and on this day, they have come together to exchange traditional vegetable seeds. Some grow African black nightshade (lisutsa/managu), others jute mallow (mrenda) or slender leaf (mitoo) and while the rest pumpkins. Those who grow managu exchange their farm-saved seeds with those who grow pumpkins and vice versa. The group is one among 1,211 from western Kenya, which are working with Prof Ruth Oniang’o, the co-winner of the 2017 coveted Africa Food Prize. Prof Oniang’o co-won the award with Maïmouna Sidibe Coulibaly, a business woman from Mali.

Seeds of Gold visited her in the village to trace where her global recognition all started. Prof Oniang’o, a nutritionist works with the groups under her organisation Rural Outreach Programme (ROP) Africa founded in 1992. Each group consists of 20 members and ROP provides them with quality planting materials, soil testing and agronomic extension services to boost food security and nutrition.

“This was my dream since childhood,” says Prof Oniang’o, who went to primary school in Kakamega County, where she witnessed five of her siblings die of malaria. She has since helped to establish Diana Elukhambi Health Centre in Kakamega to help in fight against diseases.

“Many farmers have ignored African indigenous leafy vegetables and yet they are nutrient-rich, and some of them have medicinal values that keep common diseases at bay,” she says.

“Eating traditional vegetables is an easy, cheaper and sure way of stopping diseases that include even cancer,” she added.

Mixed with Ash of Loose Soil

In pursuit of her dream, Prof Oniang’o quit teaching at the Jomo Kenyatta University of Agriculture and Technology in 2003 after being nominated to parliament. She also seized the opportunity to promote nutritious crops in rural communities in western Kenya using her influence as an MP.

The researcher says she provided to groups the first seeds, then taught them how to select the best plants for seed production. The project now works to provide quality seeds to farmers in the four counties of western Kenya namely Vihiga, Busia, Bungoma and Kakamega. Once they harvest, the farmers take the seeds to ROP’s offices, which sells to other groups and even individual farmers enabling wider distribution.

Traditional vegetable seeds are very tiny. Therefore, to grow them, they are first mixed with ash or loose soil. Thereafter, they are planted in lines and rows, then thinned after germination. However, they can also be planted in the nursery first then transplanted.

“We do a germination test on the seeds by looking at the physical appearance before we buy from farmers or recommend for planting,” says Doris Anjawa, ROP’s coordinator. Doris notes they have been able to isolate several species of indigenous vegetables with support from Kenya Agricultural and Livestock Research Organisation, through which they have developed planting materials that are packaged in small quantities and sold to farmers.

On her kitchen garden, Felda Alividza, a member of Musiega, grows African black nightshade, Jute mallow and slender leaf, among others. And she credits all these to Prof Oniang’o.

Veronica Kitele, a member of Mbaya Village Health Club, says her 10-year-old son who suffers from cerebral palsy has benefited a lot from soy beans grown on her farm. The beans are one of the legumes promoted by Prof Oniang’o.

“I have seen a big difference for the past three years since I started feeding my son on soy products,” says Kitele, noting use of the legume was recommended by a doctor.

“Our aim is not to make the farmers grow the vegetables commercially on large scale, but in quantities to serve them domestically and boost their nutrition. However, the vegetables are bringing in some little income for families,’” says Prof Oniang’o, who works with county governments, Kalro, Alliance for a Green Revolution in Africa and African Agricultural Technology Foundation to better farming practices.

Changes in the climatic conditions are one of the biggest setbacks, according to Prof Oniang’o.

“Rainfall is no longer predictable as before. As a result, crops planted sometimes fail to germinate because there was no sufficient rainfall,” says the 71-year-old, who won beat over 600 other nominees from the continent to win a cash prize of $100,000 (Sh10.3 million) she shared with Ms Sidibe.

“It becomes even a bigger challenge when strange plant diseases and dangerous pests such as fall army worms infest crops. This leaves farmers hopeless and devastated.”

Prof Oniang’o, who has organised the groups into merry-go-round financial scheme for easy loans, plans to use the money to establish a foundation, which will support women engagement and youth mentorship.

The vegetables contain low fats and calories, which means they have low cholesterol.

High cholesterol leads to diseases such as hypertension and obesity.

They contain potassium, dietary fiber, folate (folic acid), Vitamin A, and Vitamin C, which are essential for body functioning.